Staff and Board of Trustees

OPAL’s Board of Trustees operates by consensus:

Anne Bertino has lived on Orcas since 2009 and first became involved with OPAL through the building committee. The home she shares with husband Patrick is very efficient with rain catchment and solar hot water systems. She managed OPALCO’s Energy Efficiency program for four years and currently works as an energy efficiency / sustainability consultant and interior space planner.  Her varied background includes green building and design and a career in the aerospace field. She has a B.S. degree in engineering physics and an A.A.S. degree in interior design.  Anne has been a LEED (Leadership in Energy and Environmental Design) Accredited Professional  since 2008.

Rusty Diggs has lived on Orcas Island since 2003. She and her partner, Christopher Evans, with their twins Isabella and Mona have been homeowners in the Bonnie Brae neighborhood since 2006.  Rusty spent eight years prior to Orcas, working, living and stewarding a 40-acre land trust, in the southern Willamette Valley.  As internship coordinator, farm-to-kitchen manager and landscaper, she learned how to make decisions by consensus, to live in an intentional community of 20+ people and to steward forested land. Rusty co-produced the FEAST (Farm Education and Sustainability for Teens) program on Orcas, and continues to teach food preservation classes. She joins the OPAL board with a passion for humans’ right to clean water, safe home, education and access to local organic food.

Tim Fuller had a 40-year career in the fire service. He was fire chief of St. Paul, Minnesota, and Redmond, Washington, for a combined total of 18 years, and also served as interim police chief and director of public works in Redmond. He has experience on both career-related and nonprofit boards, including the International Association of Fire Chiefs, the National Fire Protection Association, the Pike Place Market Foundation in Seattle and Homes for Islanders. He and his wife, Martha, have owned a home on Orcas since 2006 and have been full-time residents since 2013. Tim has a keen appreciation of the island’s housing-related challenges. He is impressed by the broad community support for OPAL’s vision and by OPAL’s track record of making home ownership viable for so many residents.

Bob Gamble has lived on Orcas since 1978, and has been an active supporter of OPAL since the early 1990s. Bob’s professional career included managing or owning retail electronics stores and a restaurant, and for many years he worked as a Macintosh computer consultant. He has been active in the community, serving as a board member or elected official for the San Juan County Planning Commission, the Port of Orcas, the Housing Advisory Board, and the Economic Development Council and other organizations. Bob and his wife, Winnie Adams, split their time between Orcas and Waldron, where Bob helped to co-found the Waldron Community Land Trust. This is Bob’s second time on the OPAL Board. He previously served from 1997-2006.

Pegi Groundwater became an Orcas landowner in 2004 and she and her husband, Mike Moss, spent the next  5 years constructing their home.  Holding both a law degree and an MBA, her career has included corporate and securities work with major law firms in California and Oregon, ownership of several businesses, and serving as Chief Operating Officer of a technology company.  She retired in 2005 from the legal department at Intel Corporation.   Pegi has long been a supporter of affordable housing for all and is very excited to be working with the OPAL Board as they move forward.  She has served on public and private boards, including the Boalt Hall Alumni Association, Women in Business, American Association of University Women, the San Juan Island Master Gardeners, and the Orcas Island Historical Museum.   She and her husband both volunteer as insurance counselors to help people with Medicare, Medicaid and the Affordable Care Act.

Kurt Hunt has had an education and career in architecture that spans almost 30 years, working on a variety of projects from single family and affordable housing to light commercial and mixed use developments. Kurt’ has focused on design, graphics and architectural modeling. He is an associate member of the American Institute of Architects. He is also an experienced project manager, supervising all aspects of the building process from schematic design through final construction. Among his skills are working with groups doing urban planning and small community and residential developments. He moved to Orcas in 2000 and purchased his Wild Rose Meadow home in 2013. His Orcas activities include camping, kayaking and hiking with his boxer/pit mix dog, Odie.

Minor Lile and his wife Leonie Van Gelder have lived on Orcas Island since 1995. They purchased an OPAL home in 2018 after nearly twenty years as the resident managers at Indralaya. Prior to moving to Orcas Island, Minor worked for the Greater Seattle Chamber of Commerce and later as a commercial real estate appraiser. His educational background includes a BA degree in History from Whitman College and an MBA from the University of Washington. Minor has been a member of the OPAL Board since 2019 and is currently serving as Treasurer. He also sits on the Loan Fund and Finance Committees.

Margaret Mills lives on Crane Island in a house her parents constructed in the 1970s as a weekend project of about three years’ duration. She joined construction phases during breaks from graduate school at Harvard, where she trained as a Ph.D. general folklorist/anthropologist specializing in the cultures of Persian language-speaking areas. With war and displacement overtaking Afghanistan and Iran, she became involved with refugee and immigration studies, critical gender studies, oral history, and truth and reconciliation topics. She taught and chaired academic departments at the University of Pennsylvania and Ohio State University and served on boards of related national/international academic organizations. A fan and supporter of OPAL since its inception, spending summers and sabbatical years on Crane Island and retiring here as a permanent resident in 2012, she is happy to be able finally to join the OPAL Board. She finds the stories of OPAL residents, staff and other members endlessly fascinating and illuminating.

Anne Marie Shanks and her husband Bern bought their home on Orcas in 1988 and became permanent residents in 2006.  Prior to retiring 2009, she held administrative positions in State and Federal government, and with several non-profit organizations. Her educational background includes a BS from the University of Maryland and an MA from Georgetown University. Anne Marie has served on several community boards and committees including LIFT, the Local Area Immigrant Family Trust, The Orcas Women’s Coalition, Orcas Garden Club, Deer Harbor Community Club and the Deer Harbor Plan Review Committee. In 2018 Anne Marie joined the Yes for Homes Campaign and helped pass the Real Estate Excise Tax which now supports the San Juan County Home Fund.

Jeanne Beck joined the OPAL staff for the second time in 2009. She works part-time as the Stewardship and Project Manager. Jeanne oversees the implementation of new construction and renovation projects, provides support to neighborhood homeowner associations, oversees the property management firm operating the Lavender Hollow apartments, and guides OPAL homeowners through the process to sell their homes. Prior to this job, Jeanne worked as an operations manager, project manager or executive director for nonprofit and for-profit organizations. She was the first executive director of the Funhouse Discovery Center (1998-2006) and also of OPAL Community Land Trust (1990-95). She has a degree in Criminal Justice from St. Ambrose University and completed graduate course work in economics at the University of Washington.

Julie Brunner has been OPAL’s Housing Manager since January 2002, working part-time. Julie helps homebuyers through the process of buying a home, including obtaining mortgage financing and homebuyer education instruction. She also provides financial counseling to existing homeowners if the need arises. In addition to working for OPAL, Julie teaches courses for the national Grounded Solutions Network and works as an independent consultant. Julie has worked in the field of affordable housing since 1995 and prior to that in social service and international economic development. She has a B.A. from Virginia Polytechnic Institute and an M.A. in city and regional planning from Rutgers University.

Lisa Byers has been OPAL’s Executive Director since January 1996. Prior to working for OPAL, Lisa worked as Land Steward for the San Juan County Land Bank, and for 10 years as a land and property manager for the Society for the Preservation of New England Antiquities (now Historic New England), based in Boston, Massachusetts. Lisa has an A.B. from Vassar College and an M.B.A. in public and nonprofit management from Boston University. In 2006 Lisa was elected to serve as the first president of the National Community Land Trust Network and was awarded the Friend of Housing Award from the Washington State Housing Finance Commission.

Crystal Mossman works part-time as OPAL’s Communications Manager. She is responsible for educating people about the need for affordable housing and reporting on the impact of OPAL’s work to the Orcas community. Since moving to Orcas in 2010, Crystal has worked as an artisan bread baker for Roses Bakery Café and the Office Manager for Camp Indralaya. She previously worked as a graphic designer and marketing director at Coldwell Banker Bain in Bellevue and served on the Board of Directors for Camp Indralaya for six years. She has a BA in Art History from the University of Washington.

Elaine Shiozawa works part-time as OPAL’s Office Manager. Elaine greets visitors, manages the Reddick rental apartments and offices, coordinates accounts receivable and the membership database, and assists the Project, Outreach and Housing Managers as needed. Elaine previously worked at the front desk of Rosario Resort and as a manager for healthcare organizations in Honolulu. She earned a Masters of Science in Rehabilitation Counseling from San Diego State University and for 18 years provided vocational counseling to persons with physical disabilities.

Judy Whiting works part-time as the Outreach Manager.  She facilitates positive relationships with individuals who share OPAL’s values and wish to donate in support of OPAL’s mission.  Judy previously served on the board of trustees of OPAL for three years, and returned after four years of working in a range of office management positions on the island. Prior to island life, Judy and her husband owned and managed a KOA campground, and Judy worked for six years at Microsoft in user education and print management. Judy has a B.A. in editorial journalism at the University of Washington.

Orgelina Wiese, works part-time as the Accounting Specialist. She primarily focuses upon accounts payable and recording financial, property and other data for OPAL. She was a sales associate for Roses Bakery and Cafe, and works part-time at Darvills Bookstore. Orgelina was employed by Family Support Services of the Bay Area for 12 years, directing programs that strengthened families in San Francisco and Oakland.

Get the Latest Info on April’s Grove 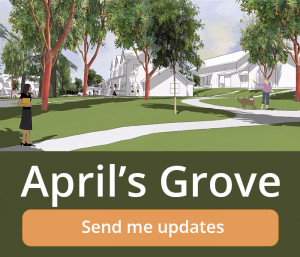