Orcas Island has a world-class reputation as a travel destination, but it is a distinction that comes with challenges: a seasonal service economy with many low-paying jobs, rental housing that is expensive and often available only part of the year, many off-island owners and part-time residents, and high property values that are out of reach for local wage-earners.

“What OPAL does for Orcas is essential.”

“Without OPAL the number of working people living here would be significantly lower.”

“OPAL gives people a fair shake at living, working, and thriving on the island.”

­– Comments from interviews with members of the Orcas community

OPAL Community Land Trust was founded to answer the persistent “housing affordability gap” that exists between average wages and median home prices in San Juan County. (Data gathered from the U.S. Census, Washington Center for Real Estate Research, Washington Dept. of Labor and Industries and the U.S. Dept. of Labor.) 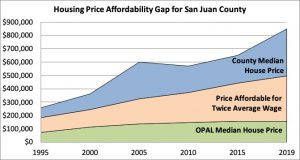