OPAL’s proposal to move the famous Edith Macefield “Up House” from Ballard to Orcas has been accepted by the current owners.

We are thrilled by this opportunity to help perpetuate Edith Macefield’s legacy and to create another permanently affordable home for the island.

Now, we have to raise the funds and move the house. To do that, a crowdfunding campaign begins immediately so everyone who loves the story and the concept of Edith’s love for her home can help make the move a reality. 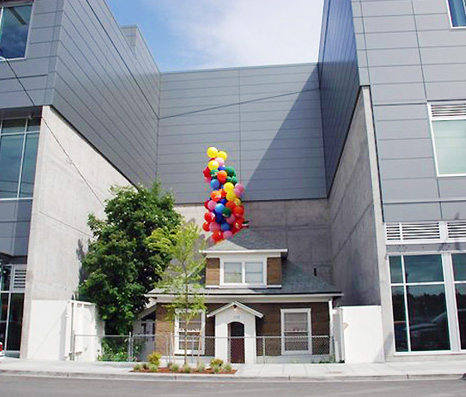 The owners of the Edith Macefield House in the Ballard neighborhood of Seattle accepted OPAL’s proposal to save the house and move it to Orcas.

This is a unique opportunity for OPAL to provide another permanently affordable home for Orcas Island, while preserving a much-adored building with a unique history. The house has had widespread media attention, including stories in The Seattle Times, The New York Times, The Huffington Post, NPR, CBS Evening News and others. When Disney/Pixar released the movie UP!, they did a promotional photo shoot of Edith’s house. As a result, many people have come to call this Seattle’s UP! House.

Our Crowdfunding Campaign Must Succeed

Now we need to complete  a successful crowdfunding campaign. We have launched the campaign to raise money to buy the lot, get the permits and move the house on an ocean-going barge. Our belief is that many people have come to love this house, and will support a campaign to save it. Anyone may donate.

We hope the donors to this campaign will be people who want to see Edith Macefield’s house saved. If you know someone who cares about this house, its story, or what it represents, would you please let us know? We would like to invite as many people as possible to contribute to make it happen.

We need many helpers to lift Edith’s house. If you help us find donors at the $100 or greater level, they will get five balloons and a thank you note to express our gratitude for their help. Click here to send us an email telling us who you think may want to help.

If you are as captivated by the house and its story as we are, you might enjoy these links:
New York Times article
USA Today video

And visit our crowdfunding page to donate today!