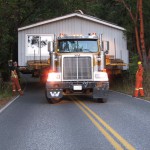 August 11, 2011 – Bob and Phyllis Henigson donated a 1,000 sq. ft. residence to OPAL and OPAL hired Nickel Bros. House Movers to move the building to Eastsound in the early morning hours of August 11th. The house is pictured squeezing through a very tight spot on Deer Harbor Road.

The building, which served as the Gropper home for many years, will be located on Oberon Lane, next to the house OPAL moved to the site in February 2011. It appears likely that a third house will join the other two later in the fall.