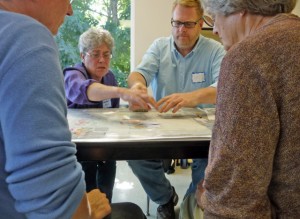 Many islanders lack access to a year-round affordable rental home. To address this shortage of housing, OPAL has purchased nearly four acres on North Beach Road – across from Children’s House and north of the orchard – and started construction on 45 affordable rental townhomes.

Jim Nelson, the prior owner of the property, said “Betsy and I are happy that this property will be serving a community purpose. “There is a real need for more affordable rental housing on Orcas Island.” The Nelsons have retained ownership of the adjoining orchard, which will remain as open space. When developed, a stormwater drainage tank will be located under the orchard.

The 2015 Washington State Housing Needs Assessment reported that there are houses with affordable rents for only 15% of renters with extremely low-incomes or 26% of those with very low-incomes. Over half of San Juan County renters (54%) are unable to afford the fair market rent for a two-bedroom unit.

There’s a similar troubling trend in terms of homelessness in San Juan County. A San Juan County Housing Bank Commission Report in October 2015 pointed to a more than 100% increase in the un-sheltered homeless count between 2012 and 2015 from 32 to 74 individuals. Similarly, the homeless living with family and friends has increased from 27 to 60 in the same time period. 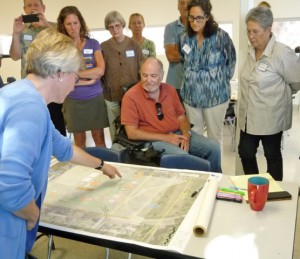 OPAL’s Board of Trustees and staff selected the team through competitive processes:

The building designs and site plan for the 45-home plan are available here: Aprils’ Grove Renderings and Site Plan.

For a preview of the community, watch the virtual animation: Take a Tour of April’s Grove. 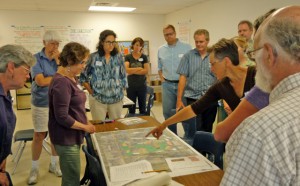 OPAL’s timeline for the project:

Why is there so much less rental housing now than in earlier years?

The market is changing. In the past, more cabins and houses were rented year-round. We believe that the proliferation of online rental accommodation companies, such as Airbnb and VRBO (vacation rental by owner) may be a factor. As one of the local young people searching for suitable housing said, “The days of the funky cabin in the woods are basically over.”

Who are the people who need rental housing?

Islanders who need affordable rentals are people who work – mostly in public service or the retail service trades. They live here now, but are constantly having to move because their rental is sold or turned into a transient rental. There has also been an increase in the population of people who are homeless. And adults with disabilities – who could live on their own with support services – need more options than are available on the island. Finally, larger employers, such as the School District and OPALCO, want reliable year-round rentals for new employees. Without access to housing, they are losing qualified prospective employees, who chose not to accept positions when offered.

How many people would be housed?

Will this compete with other rental housing being developed by private developers?

How is this different from what private developers are doing?

The rents in OPAL’s development will be significantly lower than what is possible for private developers. Rents will range from $300 to $1400 and average about $600 per month. This is possible because the project will have a mortgage of only about $2 million, even though it will cost $15.5 million to build. A private developer does not have access to the grants and donations that help to reduce debt service and thereby keep rents affordable. Put another way, private developers can’t make a project like this “pencil out.’’

Where will the money come from?

The funding plan has five elements: (1) donations from islanders and other supporters including private foundations, (2) a grant from the State Housing Trust Fund, (3) Low Income Housing Tax Credits from the Washington State Housing Finance Commission, (4) grants from San Juan County, and (5) a mortgage small enough to be repaid with rental income.

Why does it cost so much?

Construction on Orcas Island is more expensive than on the mainland, but even on the mainland, construction costs have risen dramatically in recent years. Add to that the cost of complying with permitting regulations, and also the legal and transaction costs to abide by the requirements of grantors and the IRS standards for tax credit investors. OPAL strives to build homes/apartments that are healthy and durable, which means spending a bit more up-front (but saving money on maintenance and utility costs later).

The land had a beautiful stand of trees.  What did you do with the wood?

OPAL hired Carson Sprenger, a certified arborist, to identify the large and beautiful trees that had the greatest likelihood of living at least another 50 years. The site plan was designed to preserve these trees. We also plan to maintain trees along North Beach Road. That being said, there were still a significant number of trees that came down to make room for buildings. Some of the wood went to local wood workers.  Some went to create firewoo. Most of the lumber went to the mill in Everett, providing some revenue to the project.

Were there other choices for land that didn’t involve taking down so many trees?

We looked at several other plots of land, but none were available or as suitable. This location is ideal from a great many perspectives. It is close to all the island’s schools; it is walking distance to all Eastsound services so it works for seniors as well as for families with children; it is within the Eastsound “urban growth area,” which is designated for higher density.

Will the rentals be open to anyone who applies, or are there restrictions on who will be eligible to live there?

There will be income restrictions for 41 of the 45 residences. That is part of the bargain we make when using State and Federal funds. The income levels vary by household size. For the 41 residences that are restricted, the average annual income will be around $30,000 and it will range from a low for a single person of below $14,000 to a high for a family of 4 of about $56,000. Four of the residences will not be restricted by income, and are designed to serve the needs of newly hired employees for some of the island’s larger employers, such as the School District and OPALCO.

Pledge an Amount
Click here to contact Elaine Shiozawa and pledge your gift to the April's Grove project for affordable rental housing.