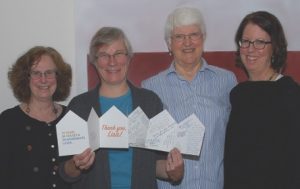 Following a recap of OPAL Community Land Trust’s activities in 2015 and the election and recognition of new and retiring trustees, a highlight of OPAL’s 26th annual meeting on April 26 was the surprise celebration of Lisa Byers’ 20 years of leadership as executive director..

“Lisa became executive director of OPAL in 1996,” said co-founder and trustee Penny Sharp Sky, who told the story of first meeting Byers back East through mutual friends and encouraging her to move to Orcas.

“Over the past two decades Lisa’s hard work and devotion to the people and life of this island have been extraordinary,” said Sky. “She has helped make possible every one of the 114 affordable houses and apartments that OPAL has added since she arrived.”

It was reported that last year 360 households and businesses supported OPAL with contributions of $302,469. In addition, OPAL was awarded grants of $166,461 from federal, state, county and private foundation sources.

“Last year was also significant in that OPAL received more than $1.5 million in bequests from strong, steadfast supporters,” said Byers. “Those dollars were added to OPAL’s endowment to secure the organization’s long-term sustainability.”

Out-going trustees Rollie Sauer, Suzanne Olson and Douglas Ellis were recognized and thanked for their many contributions.

Anne Bertino, a member of OPAL’s building committee, was elected to her first three-year term as a trustee. She brings experience in green building and design, energy efficient systems, and interior space planning.

Helen Bee, who heads the OPAL fundraising committee, and previously served as a trustee for nine years, was welcomed back to the board after term-limiting off last year.

Board president Bob Gamble and trustee Vicki Brems were re-elected to three-year terms.

Incorporated in 1989, OPAL serves 132 rental and ownership Orcas Island households and continues to accept applications from people who are not able to purchase a house in the traditional market. For more information, go to: www.opalclt.org or call (360) 376-3191.